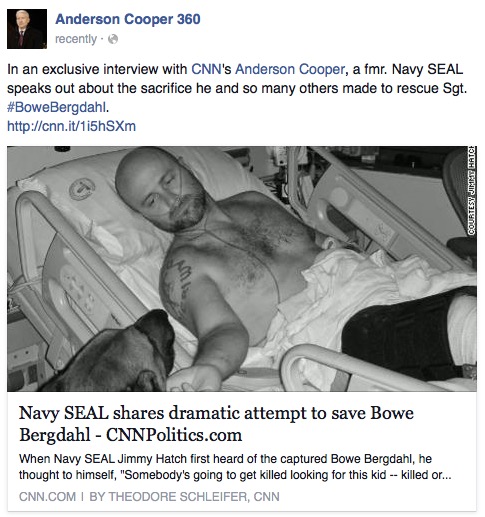 The interview I did with Anderson Cooper was aired on September 11th 2015. Anderson posted links to our charity on all of his social media platforms. He has over 6 million followers. He also put the URL on the screen during the last 30 seconds of the interview. Here are the links to the two-part interview:

In the aftermath of that awesome opportunity we were the recipients of incredible generosity.

Thank you to everyone who donated to us. I also want to extend thanks to those of you who reached out to me to thank me for being wide open about my mental/emotional health issues post getting wounded. For those of you who shared your own personal struggles with me, I am grateful. If I could give any advice, it would be that we need to be courageous. We need to know that we all count and that we have much to offer.

Suicide is a permanent solution to temporary problems.

I’ve been contacted by quite a few media outlets. They want me to extrapolate on the Bergdahl mission.

The real message isn’t that Mr. Bergdahl allegedly walked off his post in a time of war.

The real message is that in spite of his actions, a group of Americans that I was fortunate to be a part of, went out to try to rescue him anyway.