I am going to let Officer Huling describe his Working Dog “Trigger.”

“Trigger is a 7 y/o English Black Lab. He was the only “other” dog at Tarheel K9, a kennel of 45 Belgian Malinois so he’s off the hook. I picked him over a Malinois because of two reasons, 1- they were considering putting him down because he had been at the kennel over a year and 2- they said I was too green for a dog like that so I took that as a challenge. I picked him up Jan 4, 2010.
Trigger excelled in training making me look like a champ. He is a narc detector trained for marijuana, cocaine, heroin, meth and E. Certified by VPWDA. He is assigned to the Organized Crime Task Force.
Our first day on the street he alerted to a kilo of cocaine hidden in a spare tire. I was scared to call it at first but Trigger seemed so sure so I went with it. It’s been smooth sailing ever since, if he says it’s there then it’s there.
As of Feb 15, 2015: We have conducted 6395 sniffs.
Trigger alerted to the presence of narc odor 603 times. Those alerts produced 553,855g of marijuana, 3045g cocaine, 559g heroin, 1144 E pills, 1205g meth and seized $2,266,268 in cash. Trigger is responsible for establishing probable cause for 39 residential search warrants with a grand total of 417 people arrest.” 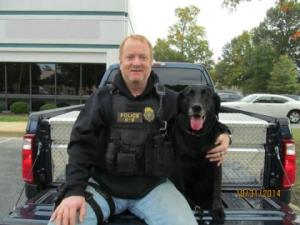 I’m glad we could help this crew out. Thank you for your generosity. Lets get some more stories.