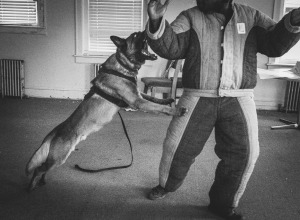 So some of the 3 people who follow the blog have asked me about “Rooster” and they wanted to know more about him. He is one of the first Dogs we helped out and he is the only one we’ve helped with a medical procedure.

I asked “JP” the Police Officer who rolls with K9 Rooster when he goes to work if he’d share some of the details of the award they’d received at the annual meeting of the Virginia Police Work Dog Association. The award was given for Rooster’s actions during a dangerous evening here in my community.

At about 0100 in the morning a few thugs with guns started a bit of a robbery spree. A few hours later the thugs were spotted driving around in their car. JP and K9 Rooster were called in and when the suspects were told to stop and show their hands, one of the suspects began moving away from the police. JP yelled out warnings to the suspect that he’d send Rooster to deal with him if he didn’t stop. Those warnings were ignored and Rooster, a 65 lbs. K9 chased down and apprehended (that means he bit) the suspect, a grown-ass man. JP followed closely and while he was cuffing the first suspect, another suspect decided to flee. JP sent Rooster out again and while Rooster was on his way to engage, another Police Officer caught the suspect. JP told Rooster to “hold up” so as to not complicate things with the other Officer. Rooster stopped as instructed and waited until he was asked to return to JP. Both of these suspects were armed and dangerous and Rooster was an integral part of the arrest of these dangerous thugs.

On another evening another thug broke into a home where there were two young women. They called the Police and JP+ Rooster were invited to the incident. The suspect/thug was hiding deep in a closet where he couldn’t be seen. Rooster let the Officers know that there was something up in the closet and when the Officers looked inside they couldn’t see anything. Rooster kept at it and was released. He engaged the thug and the thug kicked and punched Rooster vigorously. This is a bad idea with 65 lb. Rooster. It made Rooster very angry and Rooster went ahead and punished the thug with his teeth and jaw.