When I heard about what was going on with K9 Rooster I knew that this would be my mission. K9 Rooster is a Bomb and Patrol Dog. “Patrol” means he hunts bad guys down and holds on to them until the humans get there to do their business. Rooster had experienced a serious breathing issue and he needed to get that issue fixed or he was going to be put down. The Police Officer who is Rooster’s “pilot” did some research and found a place nearby that would do a surgery to try and fix Rooster’s breathing problem. The City where Rooster Serves has a Veterinarian and that human didn’t think the surgery was worth the money.
Rooster had been actively involved in the apprehension of multiple ARMED suspects after they committed a robbery and had found and then apprehended an intruder in a citizens home who was hiding in a closet. In short, Rooster was and is worth the $ to keep him with his Partner and serving their community. It is difficult to find a Dog who can handle that type of work on a consistent basis and Rooster is “all in.”
Because of your generosity and kindness, Rooster just returned from his surgery and is doing well. He has to be on “light duty” for a while and then we will see how he does. Even if Rooster doesn’t get to go back out and do what he loves, which is hunting down criminals, he will still get a chance to live with his family.
I sincerely appreciate your kindness and generosity. 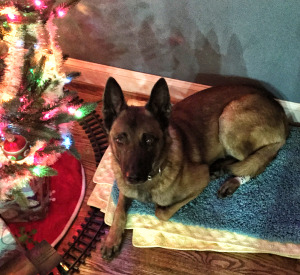